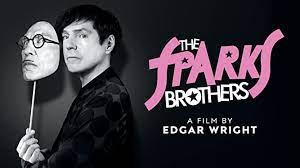 “When Do I Get to Sing My Way?” Sparks lead singer Russel Mael uncomplainingly crooned on 1994’s Gratuitous Sax and Senseless Violins, the band’s 16th studio album. Nowadays the answer would be, for the next two decades, since the song has turned into an integral part of the band’s live repertoire, and therefore become its own kind of standard.

However, back in ’94, it seemed like a clever way to contextual the Sparks paradox, a band very often loved by critics and musicians, but after the heady days of making hits in the seventies (“Something for the Girl with Everything,” “This Town Ain’t Big Enough for Both of Us,” “Beat the Clock”), generally avoided by consumers of popular music.

“When Do I Get to Sing My Way,” also yielded a sweet, classic Hollywood-looking black and white video, underscoring the fact that Sparks has always been fun to watch. This was no less true in 2021 than it was in 1972, when the band first appeared on Dick Clark’s American Bandstand with “Wonder Girl.”

2021 saw Sparks make multiple forays into the world of cinema, first with Edgar Wright’s affectionate documentary, The Sparks Brothers, and later, with Annette, director Leo Carax’s  English-language debut, which will be the subject of a companion piece somewhere down the road.

Wright’s movie is a lively mélange of talking heads (from record producer Muff Winwood to Franz Ferdinand’s Alex Kapranos), various forms of animation, TV and live concert footage, and interviews with  the California-born Mael brothers who comprise Sparks, Russel of the mop top and androgynous falsetto, and Ron of the toothbrush moustache and keyboard dexterity. Chronologically arranged, it’s a film that works best for the uninitiated since anybody who’s listened to Sparks since the mid-1970s is painfully aware of one of the film’s recurrent themes: recognition for Sparks’ brand of rock music, that is, getting their due for what they’ve done, has been capricious.

In fact, it’s a familiar thread by now when Sparks puts out a record, for example, 2003’s ‘Lil Beethoven,” featuring the sublime, “My Baby’s Taking Me Home,” and oddly touching, “I Married Myself,” and some wag writes about “a renewed interest” in the band, or overreaches and describes the work as “Sparks very own Kid A.“

As Wright’s film so effectively points out, Sparks are art pop chameleons. They reinvent themselves time and again. Sometimes their choices are great, sometimes not-so great, but the results will always be daring, witty, and all their own. And they’ve been doing it forever.

Early on, their physical presence played an outsized part in making their bombastic style of glam rock so effective: the yin of the shaggy-haired Russel prancing around the stage, hitting the high notes and the yang of brother Ron, who, as Simon Price has written, would sit “immobile, catatonic almost, like a Komodo dragon…Apart, that is, from his fingertips, jabbing at the keys…”

When they abandoned the guitars and bombast for the Gorgio Moroder produced synth-driven disco of 1979’s No. 1 in Heaven, the critics abandoned them, but they insisted on their vision. At the time Russell told Melody Maker’s Harry Doherty, “Just wait, six months from now, watch all of the new wave synthesizer disco bands which will be popping up…” And of course, that’s exactly what happened, with Pet Shop Boys, Soft Cell, Yello, and others digging in.

At some point in The Sparks Brothers, Beck says, “You get on a tour bus with a bunch of musicians and eventually the conversation will go to Sparks,” and the sentiment is echoed throughout, underlining the claim that Sparks is “your favorite band’s favorite band.”

Wright, who is known for making hit movies that revisit film genres he likes with fresh and funny takes—Shaun of the Dead, Hot Fuzz, Baby Driver—wisely gives the Mael brothers enough space to express their sense of play. Asked in an interview segment early in the film, how many records Sparks have made to date, Russel answers, “Sparks has made 25 albums.” Asked how many more they will make, he deadpans, “With advances in medical technology, there will be 200 to 300 more Sparks albums.”

It’s possible, isn’t it? After all, this is a band that played their entire catalogue (at the time, 21 albums) over the span of 21 nights, dedicating one night to each record, as recently as 2008. This is also a band that formed a supergroup with Franz Ferdinand for 2015’s FSS, and according to Ron Mael, wrote 42 distinct pieces of music for Annette.

In the end, boundless energy for reinvention and resilience are what The Sparks Brothers is about, and it is these qualities in their music that identify Ron and Russel Mael as the artists they have been for five decades.

So, in the spirit of establishing a courteous process going forward and to avoid confusion, I…

Pagan’s tiny cottage in the woods became what the Scots refer to as a “howff” – a gathering place for hunters, shepherds and drunken wags.

From musician to musician: Mark Cutler on David Crosby

…”Triad” and “The Lee Shore.” I learned them both but had no clue what they were really about. They confused a 7th grade boy. What the hell is a “sister lover” or a “water brother “?